The bullshit of My Red Light 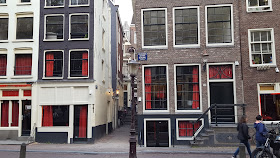 I promised myself that I would never pay anymore attention to My Red Light. But today again there's a media storm about My Red Light, which bugged me so much that I simply have to write about it, in order to set a lot of things straight.

Let's start with the first and most important thing. My Red Light was supposed to be a brothel run by sex workers. Well, that failed. It's as simple as that. There's an entire board of so called 'experts' in a 'Council of Supervision' who have the real power and control over this brothel. These people include people from aid organisations such as the SOA Aids Fund, HVO Querido, a former public prosecutor, a bar/restaurant owner and people like this. But no sex workers apparently because we're not smart enough to do this, right? We're not educated enough, right? Because everybody always try to offer us some form of education, like we're dumb or uneducated or something. Little do they know that many sex workers working in the Red Light District finished their college, have a degree or even finished university!

Sex workers that participated in this project since the very beginning where turned down jobs to run the brothel, because they didn't get through the 'screening'. In other words, they wouldn't be 'good enough' to run the brothel. In stead of picking a sex worker with experience behind the windows at least to be the manager, they actually picked one of the other brothel operators as the manager in My Red Light. I'm confused. I thought these where the people that treated us so bad that we needed to start our own brothel, and now you hire them as manager?

The claims about My Red Light being a brothel where women don't need a pimp and wouldn't be depending on brothel operators are a lie. First of all, women in the Red Light District don't need a pimp, that's why we have the police. It's also implying that other brothels are full of girls with pimps, and they wouldn't be, but also that is complete bullshit. They have just as much chance to have girls working there with a pimp as any other brothel.

The argument that because of My Red Light sex workers wouldn't be depending on a brothel operator anymore is an argument that even a 3 year old can see through. My Red Light IS a brothel operator. So yes, we're still as depending brothel operators now with My Red Light as before, nothing has changed! They're just pretending to be better, which also makes me kind of wonder why they need to do that, if they really are better. Trouble finding girls to rent your rooms, people? Is that perhaps the reason you need to attract so much attention? And is this perhaps the reason why none of the girls I know want to work there?

For example:
I want to rent a room. At My Red Light this will cost me 160 euro. But two of the biggest brothel operators offer me a room for 150 or 155. So they're more expensive. Heck, there are even brothel operators that rent out rooms for 130! So that's not certainly not an improvement, they're the avarage price. So no improvement there.

Second example:
I want to rent a room for the whole week, but want one day free. At other brothels they give me one day free and I don't have to pay, some even offer 2 days free. At My Red Light this is the same.

Third example:
I want to go on holiday for a month. At My Red Light I can't, because they only allow you 3 weeks of vacation max. But with my current brothel I could even go for 2 months maybe and it wouldn't be a problem. So that's much worse.

Fourth example:
I want to quit my job, because I really don't want to do this anymore. At my current brothel operator I can just leave, just like that. But at My Red Light you have to cancel your room one week in advance! In short, they're actually forcing you to work one more week! I thought this project was aimed to be against forcing women to work, not actively doing it!

Fifth example:
I get sick and need to stay in bed for a couple of days. With my current brothel operator I don't have to pay for my room. But at My Red Light I have to pay the first two days that I'm sick. How is this better?!

So the rental conditions aren't much better, but slightly worse at best. They're even forcing you to work when you want to quit, by having to cancel one week in advance, a rule that no other brothel operator has!!!

And of course also they will offer you again courses to do something else, an exit program basically. As if there aren't enough exit programs and organisations offering prostitutes to find another job. People, seriously! Is that the only thing you can think about? She's a prostitute so we have to rescue her? Because the rental conditions certainly aren't any better than other brothels and neither are your prices or the way you treated the sex workers involved in this project.

And then let's talk about the decoration of My Red Light. An 'architect' designed it, as if it was a NASA space program. Come on people, it's a window brothel, it's not that fucking difficult! But guess what?! They managed to even fuck up that! They made rooms black! From all the colors they could've picked, they chose black as a color for a profession during the night! And the only way they could've compensated for their black rooms, was by pumping in a shit load of light to gain some attraction. But the lights are hardly noticeable!!! In a black room!

Or what's even worse. The alley which they have, there are no red lights on the outside. Just a big lantern with white light. So people will just pass that alley thinking there's nothing there, because there's no red light in that alley. Especially because there hasn't been anything in this alley for years. Heck, there used to be big red TL lights on the sides of the building in this alley. Why didn't they just leave them there? Why did they take them out? Or at least replaced them, with red led lights or something? But no red lights on the outside? Just one giant white lantern? Maybe you guys should've called this project My White Light. It's the only really noticeable light that you have anyway.

And I also don't get it. You use the same huge lanterns on the other buildings. But the red lights you've put in them give much less light. And the led strips with red light on the inside are also hardly noticable. What are you guys scared to put red lights in your brothel or something?

Seriously everything about this project is fucked up. The working conditions are worse. They're pushing down other brothel operators as criminals, but you hire them to work for you as managers. You pretend to be a better brothel than others, while your rental conditions are either the same or worse? And I'm getting really fucking tired about the fact that you keep pushing other brothels, and with that other sex workers, down to promote yourselves. If you're really as good as you claim, you wouldn't need that. But apparently it's the only way you guys know how to work. Because a good business doesn't need promotion, it's business promotes itself.