Jojanneke's 70% forced prostitutes is a lie 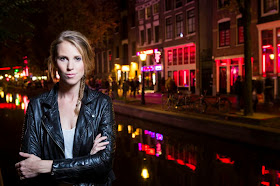 Numerous times she's claimed it already. According to Jojanneke van den Berge 70% of the girls working behind the windows are forced. These are numbers from the Public Prosecutors (Openbaar Ministerie) she claims. When asked for a source about this, she refers to her documentary. But of course a documentary isn't a report, a documentary is simply something that might mention a report, but it doesn't show it. So the question remains what her source is. The fact that after repeated asking for it, she only keeps referring to her documentary tells us two things.
She doesn't have a source of is scared to show it, because it probably won't support what she's claiming. And secondly, she wants to get famous, which is why she keeps referring people to watch her documentary, in stead of coming up with some real facts and not false claims.

But after a long search with my boyfriend, we were able to uncover the statistics she based this claim upon. And shocking fact is, the only two things true about what she claims, is the fact that is mentions a number of 70% and that it's originated from the Public Prosecution Office. And those are about the only two things that are true about her claims, because if you take a closer look at what it says, you'll find out it's something completely different from what Jojanneke van den Berge claims.

To begin with I'll refer to the origins of this statistic, which can be found here on the website of the Nationaal Rapporteur in Holland. The article is about new statistics about human trafficking and they are based upon the statistics of the Public Prosuction Office (OM) and CoMensha, the organisation which counts all the 'possible' victims.

That is what it literally says on the website of the Nationaal Rapporteur. These are also the only statistics to can be found which mention 70% that originate from the Public Prosectution Office. There are simply no other documents to be found that mention 70% in combination with forced prostitution or human trafficking that originate from the Public Prosectution Office, or any other source for that matter. So either Jojanneke has found some secret, hidden document that nobody knows about, except her and the Public Prosectution Office, but I highly doubt that. Or these are the statistics she's referring to, which explains why she's so reluctant to give away the source, since that would undermine everything that she's claiming.

So why is Jojanneke wrong with her claims? Well, first of all, she repeatedly claims the 70% are only about window prostitution and nothing else. This is false! These numbers are about all human trafficking, and not solely those from window prostitution. This already gives her one reason not to give us the real source, since she knows it doesn't hold up. But this isn't the most shocking false claims she's making.

But most important is the fact that this 70% is only based upon the cases that see court. In short, this is not based upon the total number of prostitutes working in Holland, or those working behind windows. This is based ONLY upon all the court cases in Holland, and not those who never go to court. Obviously the number of trafficking victims that go to court are much higher than those who do not, since there must be reason why they go to court in the first place.
Basically this 70% is not a percentage about how many girls are forced into prostitution, but it's a conviction rate. This conviction rate shows in how many of the court cases someone get's convicted versus how many are not getting convicted. This says nothing about how many girls are forced behind the windows, but only about how many people that go to court for human trafficking cases get convicted in the end.

To give you an example, let's say there are 1200 cases of sexual assualt in Holland (rape, but also lighter forms of sexual assaults, like sexual harassment for example), and from those 1200 cases 900 are found guilty and therefore convicted. That would mean that 75% of the cases lead to a conviction. Just like how 70% of the court cases about human trafficking lead to a conviction. This however doesn't automatically mean that 75% of the women in Holland get raped, which is how Jojanneke presents things. In short, not 70% behind the windows are forced, but 70% in court are found guilty. This is something completely different from what Jojanneke claims.

This means that 70% says nothing about how many women are forced behind the windows. And how could they? The Public Prosectution Office has never been in Amsterdam's Red Light District to take a look or to do research, since that's not their job. The job of the Public Prosectution Office is to deal with court cases, not to do research on how many girls are forced in the field, that's the job of CoMensha, the police and the KMar (marshals). And that's also exactly what they did because the only thing they did, was count the total number of trafficking cases, and calculate how much of those court cases end up in a conviction.
So these numbers are conviction rates, not statistics about how many girls are forced. And these numbers are certainly not solely based upon just window prostitution, even though Jojanneke claims that is the case. Also she claims this is about how many girls are forced, while that's not the case at all, since these are numbers on trafficking and not just forced prostitution alone.

So media, wake up! Check your facts! Don't believe whatever stories people tell, check the facts for yourselves before publishing it! You've had plenty of examples by now, to prove that people are lying about prostitution in a negative way. So whenever someone comes with some story about how bad things are about prostitution, you first check the facts and the sources!
And of course the EO isn't going to check the facts of Jojanneke. Why should they? She's claiming things which play right into the cards of more conservative Christians, which is to spread negative stories about prostitution, in hopes to make it illegal. This is exactly what they want, and this is also the reason they hired Jojanneke van den Berge, since she was already against prostitution to begin with, just like the EO itself.

How much longer will people believe the bullshit about prostitution? How much longer will people keep blind to all the lies that are spread? How many more writers, journalists and reports have to get fired because of fraud and untraceable sources, before people begin to realize these stories are just fabricated to criminalize prostitution, in stead of helping victims of trafficking.
For how long are you going to stay blind to this? Are you going to sit around, read this post, and move on with your life? Or are you going to stand up against this injustice, and share this article, so that everyone can read the lies people spread about my job and my workplace? Stand up and fight! Fight against the corruption, the corruption in the media who are protecting liars out of moral and political motives. Fight against the corruption in the politics, who are not interested in you, but in themselves and their own morals. You didn't really think they're making human trafficking laws to make things better for us, did you?

Share this article, and let Jojanneke answer for the lies she's been spreading. Let her prove where here statistics come from, if she has any. Because as far as the facts go, there is no number of 70% the Public Prosectution Office mentions that are about forced prostitution, besides how many court cases lead to a conviction. So, Jojanneke, if you have any proof, bring it to the table! If not, you're just another liar like Perdiep Ramesar, Maria Mosterd and Patricia Perquin, gaining fame over false stories about my job and my workplace.